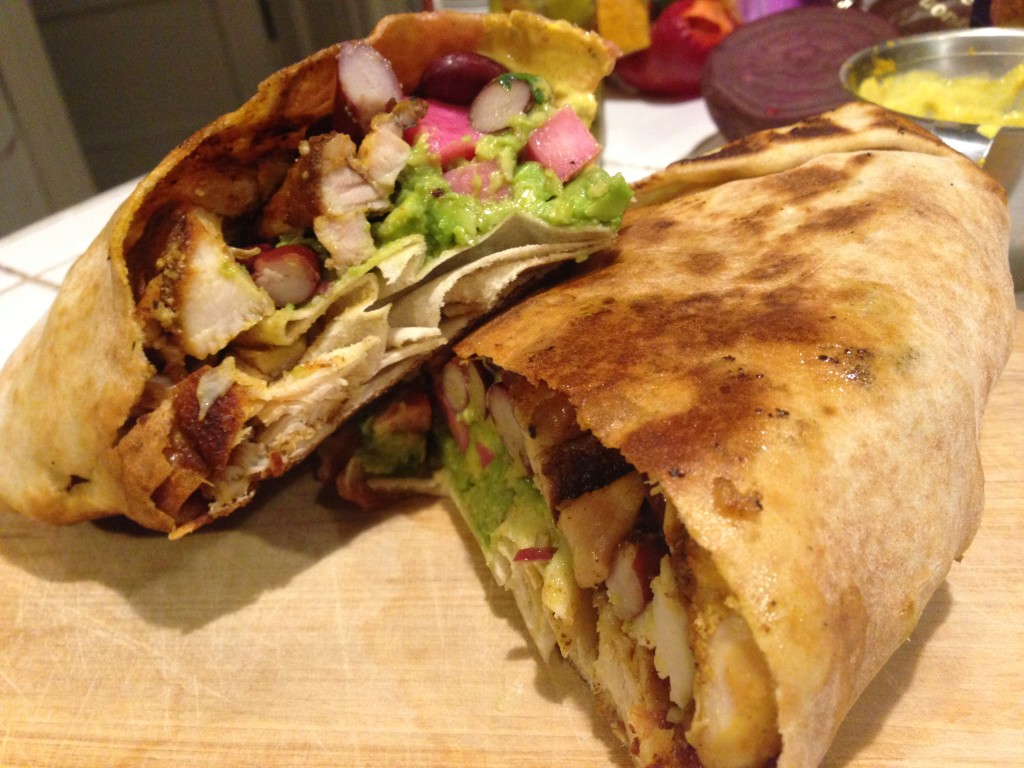 WHEN BURRITOS AND SHAWARMAS COLLIDE

As I sit on my couch, food coma’d as I am, I can only think about how this is possibly one of the tastiest things I’ve ever made. It’s like a burrito and a shawarma made love and had one of those beautiful mixed-ethnicity kids.

It all started with a trip to the market. Boneless chicken tenders were bought. I had shawarmas in mind, and what do you need for shawarmas? Pickled turnip, of course! So of course, turnips were bought. I checked google translate, they said that turnips were “rāceņi”. So I picked up these little, dark balls, that look like they’ve just been taken out of the ground. Then I kept walking, and curiously, found these root vegetables, labeled “turnipši”. Hm? At this point I began doubting my original purchase…

What an odd word…

No matter, I peeled and chopped the black turnips, sterilized the jars, and heated up the pickling brine using this recipe (equal parts vinegar + water, tbsp salt + sugar). And added a slice of a beet to each jar.

In one jar I placed the beet slice on the bottom. For the other, I added it to the top. Ended up having to flip the jar on the right upside down to get the beet juice to colour everything.

The recipe says to let the turnips marinate for a week, but I couldn’t wait. I ended up cracking open the jar the next day. And you know what? It tasted just about right! Maybe just not as pink as they could be…

Since I had a few ripe avocados on hand, I knew they had to be used. Hence how this turned more into a sort of burrito than a shawarma. But don’t be fooled, the end result was delish!

Feel free to edit your own spices based on what you like and what’s on hand. But this combo was quite delicious.

First I seasoned the chicken on both sides. Sprinkled with salt, pepper, garam masala, turmeric and paprika powder for colour. Gave it a good rub. Then placed on a hot pan with some oil. Cook until nicely brown on each side and cooked through. When the chicken is cooked and slightly crunchy, remove from the pan and let cool.

Then I got set on the guacamole. In a bowl, I combined the avocado (peeled and pitted), crushed in the garlic, squeezed in the juice from half a lemon, and added salt & pepper to taste. Quickly smushed together This doesn’t have to be perfect, lumpy is good.

In another very small bowl, I combined the mayo, apple cider vinegar, curry powder and turmeric (1 tsp each). This will be the sauce, and it gives a great bright yellow colour for contrast.

Cut the chicken into smaller pieces. Open the can of beans, rinse and drain.

Then you have to put it all together. I opened up our round flatbread, and added a generous portion of the chicken, a dollop of guac, beans, and turnip to taste. Drizzle the yellow mayo sauce on top.

Roll up the flatbreads as tight as you dare (as to not rip the bread). Turn on the heat, and place on the same pan you cooked the chicken on (I wish I had a grilling pan, but this will have to do). For the pressed panini effect, I placed a plate on top of the flatbreads and pushed down. Flip the burritos around, and do the same. Make sure that you don’t leave them too long, so that they don’t burn. I do like the slightly blackened effect, though.

And voila! Either cut in half and serve on a plate, or wrap in parchment paper and hand it to the eater.

The oh-so delicious mashup of shawarma and burrito.

HOW LATVIAN MYTHOLOGY CONTRIBUTED TO THE OLYMPIC SILVER IN BOBSLEIGH »