reviews of our women on the ground essays

reviews of our women on the ground essays

Media environments in the Arab world can be stifling for one’s journalistic career, but to be a female journalist in the region also has its advantages. Women can often get stories their male counterparts cannot get. At the height of conflict in places like Iraq, for example, female reporters were often able to pass through checkpoints and enter militia-held areas, which was unthinkable for their male counterparts.
The diversity of voices out there is even greater than one book can capture, but where the book succeeds is bringing together different voices, allowing them to tell stories of their own choosing, each one being alluring in its own special way. As Zahra Hankir says in the introduction, “I created this long overdue anthology because it’s a book I desperately wanted to see on bookshelves everywhere”. If the key to a good book is to produce a book that you would like to read, I think Hankir has created a book that we are all desperate to read.

In one essay, Hannah Allam recounts the need to keep her sense of humor through the violence in Iraq. To her, Iraqis can be funnier than anyone, even when death is looming. She shares a local joke: “As the years stretched on without the restoration of power, a popular joke was that a distraught boy runs up to his mom and sobs that his father had touched a wire and been electrocuted. The mother replies: ‘Thank God! There’s electricity!’”
Although it may seem macabre, these very human moments signify the resilience and perseverance of a society attempting to keep itself together. In another essay, “Love and Loss in a Time of Revolution” by Nada Bakri, we read about the author’s emotional experience of living through the loss of her husband, Anthony Shadid, also a journalist, who died from something as routine as an asthma attack while reporting on the front lines in Syria.

But even with how candid much of the content is, some choices are questionable. In one case, the publisher opts for direct translation of all Arabic until until one protest chant: “Allah, souria, hurriye, wa bas” choosing instead to indicate it was “calling for freedom in the country.” This stood out to me in a volume that is, by its very nature, in opposition to so many stereotypes of women, society, and life in the Arab world. Why choose not to include the translation of God, Syria, and freedom for an English-speaking audience?
Frankly, this stunning self-awareness and (overly) harsh self-critique is balanced by other essays tending toward the opposite. Still, however you may feel about the authors at the end of every chapter, their characters and experiences are laid bare. As writers, journalists, and editors working in the region we all make choices; and one cannot deny the fortitude needed to candidly share those choices with an anonymous audience.

The book is divided into five sections: Remembrances; Crossfire; Resilience; Exile and Transition. I chose not to read them in order and don’t feel I lost anything by skipping around so I could read essays by writers I was familiar with first.
Paperback, 278 pages | 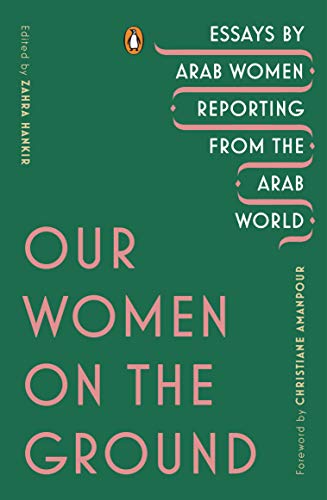 United by their feminism, journalistic skills, and their extraordinary courage, the intrepid contributors to this collection join the sisterhood of women war reporters like Martha Gellhorn, Marie Colvin, and others. They take risks, dodge bullets, and crawl around ruins to reveal what has happened in horrific conflicts in places like Syria and Yemen, and they put a human face on all of it. Many of the faces are female, even though they may be veiled or covered by burkas.
“Lebanese-British journalist Zahra Hankir has gifted us with these women’s experiences and their voices.”