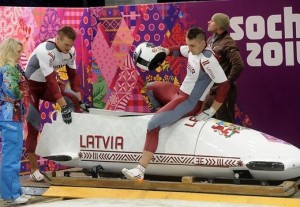 HOW LATVIAN MYTHOLOGY CONTRIBUTED TO THE OLYMPIC SILVER IN BOBSLEIGH

These past Olympics have been mind-blowing for the Latvians. A very small country, with the third most medals per capita of all participating countries, Latvia also managed to induce partial heart attacks to 35million Canadians with the show-stopping Canada vs. Latvia hockey game, drawing all eyes on Latvia (similarly to the last summer Olympics when Latvia won gold in men’s Volleyball – “Wait, do they even have summer?”)

Edit: not gold in volleyball, bet bronze in beach volleyball, beating the US team in the quarter finals. Thanks to the readers that spotted that mistake!

A satisfying end to the Olympic run was when team Latvia’s bobsleigh team nabbed Silver on the last day. The bobsleighists had been a favourite and everyone had hopes for the team. They didn’t let us down, and just missed gold by a sliver.

But my rooting for the Latvian Bobsleigh team has a backstory, and I was extremely emotionally invested in their success. Because I had the honour to give my input on the symbols that were included in the bobsleigh design. The goal – not just to make it pretty, but to create such a strong string of Latvian ornaments, that the underlying strength and meaning of the symbols would guarantee a win (combined, obviously, with the talent and hard work of the Olympians :P).

The goal – not just to make it pretty, but to create such a strong string of Latvian ornaments, that the underlying strength and meaning of the symbols would guarantee a win.

Since I had already worked with the Latvian Olympic Committee and Latvijas Gāze (enthusiastic supporters of the Latvian Olympic Team) during the previous Olympics with the friendship bracelet project, we already had the opportunity to discuss Latvian symbols, their meanings, and how they can be applied to these Olympic souvenirs with a deeper meaning.

A big bunch of olympic friendship bracelets, featuring the thunder cross, symbolising the “excellence” value of the LOC.

I was absolutely dumbstruck when I was asked to do some sketches for what would later be painted onto the Latvian team’s Olympic bobsleighs.

So I went to the drawing board. This was my first sketch:

The first draft of the symbols that could be included, and why

“Laimas Slotiņa” >>>lll<<< for luck – Laima is the patroness of fate. This is her broom. It protects and brushes away all that’s bad.

“Zalktis” – the grass snake – is known as the keeper of wisdom. I figured our Bobsleighists needed some wisdom go do well.

“Māras Krusts” – Māra is something like Mother Nature. She’s responsible for everything in the physical world. So you want mother nature on your side when you sliding on frozen water.

“Dievs” – the ancient Latvian pagan word for meaning God, not be confused with the Christian God. This symbol is the “roof” of the world, and attracts the protection of the “higher powers”.

Once I had an idea of which symbols should be included and why, I went back to the drawing board to think up a nicer, more symmetrical design. This is what I came up with:

Hand-draw, can you tell I’m not friends with photoshop?

You have to imagine the line starts in the top-left corner, and makes its way across the page like words if you were reading a book.

The designs were then promptly sent over to the very knowledgeable Janīna Kursīte – who is the authority on all that is Latvian folklore. With her suggestions, it was back to the drawing board for a redesign, this time including “sun” symbols on either side for posititvity, happiness, smiles and success, “Ūsiņš” as a symbol of strength (two in one – the bobsleigh and the athlete).

And so this is what the design came back with:

So really the bobsleigh team should just hand those medals over, because we know what made sure we win

« WHEN BURRITOS AND SHAWARMAS COLLIDE