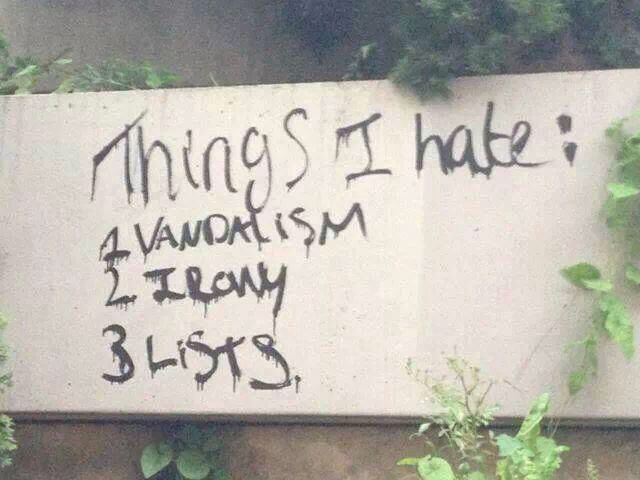 HAS ANYONE ELSE NOTICED THE INTERNET’S RECENT OBSESSION WITH LISTS? LISTS OF EVERYTHING!
In light of the recent trend of list (looking at you, buzzfeed and thought catalog), I’ve decided to make the life of these content creators easier. I mean, they must be running out of things to make lists of by now….so I’ll produce a list of things to make lists of, you know, in case they’re ever short on ideas.

LISTMAKERS, FEEL FREE TO EXPAND UPON ANY OF THESE RIDICULOUS LISTS!
SOCIAL SKILLS THAT WILL BE LOST DUE TO THE INTERNET ERA
You know, like, basic communication…

THINGS TO DO WITH EMPTY PIZZA BOXES
Box Fort

THINGS TO DO WHEN THE INTERNET IS OUT
Internet is down

THINGS YOU CAN TO DO YOUR CAT TO BECOME FAMOUS
dress them up, put glasses on them, make them chase basketballs…pretty much just video your cat….aways….because you never know what they’ll do next.

THINGS YOU CAN “COOK” WITHOUT USING A PAN, OVEN, STOVE, OR MICROWAVE
‘Nuff said

Lists are popular, and understandably so. Umerto Eco, the Italian philosopher, has said that “The list is the origin of culture“. That by acknowledging things (anything from musical masterpieces to wine to tips), you give them value, and acknowledge their existence.

So by default we’re drawn to listmaking.

Sunsan Sontag also was a fan of lists. Which makes me dislike them a little less.